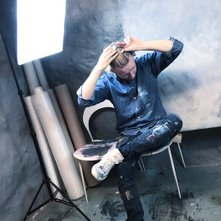 Swedish artist Jacob Södergren creates organic abstract works that he himself describes as structured chaos. Each of his paintings teems with small variations in texture, tone, and shape, asserting a singular uniformity and repetition. In this way, the works become a field of interest onto which the viewer can project their own interpretations.

Working with large canvases, Södergren creates pieces that contain a single strong focus or visual theme, and at the same time vary in their many details. This contrast of macro and micro adds another facet to the pigments and incorporates the artist's fluid use of materials when he applies the paint to the canvas.

Multiple layers of paint build up into tangible and spontaneous compositions. Flecks of metallic pigment emphasize a natural value among the layers. The pieces balance careful attention to composition and pattern with a geological quality.

Inspired by the colorful world around him, Södergren translates inspiration and color combinations from the everyday into something less tangible. He further incorporates an interest in furniture design and modernism into his works in his restrained yet fluid forms.